The 90-Day Rule (and Other Secrets to Consistency)

Doing anything consistently is tough, whether it's practicing a new skill, learning to code, exercising, or even flossing. We tend to build up a lot motivation at the very beginning of those, but run out of steam after a while. Why is that? What can we do about it? Here are some lessons I've learned over the last few years that have helped me hack my brain into writing or creating content consistently as well as build better exercise and eating habits.

Why is consistency so hard?

Why is it so hard to do something consistently? I've observed two major reasons:

In the beginning, we tend to overestimate the role that willpower has in building consistency.

Let's say your goal is to blog consistently and you're just getting started. At first you imagine yourself effortlessly writing thousands of words as you sip your favorite hot beverage with birds chirping outside. When you finally sit down to write, it's another story. The blank page and the blinking cursor taunt you as you try to think of what to say. I personally hear Nelson from The Simpsons saying "Haha!" on every blink, like this:

As it turns out, writing (like any skill) is hard. The mistake we make is assuming that it will be that hard forever. That mental image of "blogging consistently" morphs from a blissful hobby into a constant battle with Resistance (Steven Pressfield's term for that feeling we get whenever we try to be creative). Expending that level of willpower for weeks, months, or years feels downright impossible. It's a huge motivation-killer.

There's also the tactical hurdle of just remembering to do the thing you're trying to do. You might get one or two under your belt, but then something comes up and you miss the third. Suddenly a few weeks go by and you still haven't done your next round. Eventually you just quietly give up and promise yourself you'll try again next month, next quarter, or next year. I've been there and I get it.

Back when I did financial sales in my early 20s (which was supposed to be my first step towards a career in financial planning), I saw this motivational speaker give a talk at a local business event. He was pretty corny with his fake tan, silver necklace, and refusal to button his shirt up all the way, but he actually did make one point that stuck with me: half the battle is just showing up.

As an introvert whose job was to go to business networking events and talk to strangers (it was as awful as it sounds), that was really helpful. I dreaded having to go to those events. Not only did I have to muster up enough courage to strike up conversations with people, but I had to do a lot of follow-up after the event. It was stressful and emotionally exhausting. I changed my strategy. When the day of event came and I started to feel that dread, I promised myself that I would just show up, with no other goals or promises to myself. I told myself that even if I were to show up and stand in a corner, the odds of talking to someone were already greater than they were staying at home (which were zero!). To my great surprise, this trick worked really well. At least half the time, just getting myself in a different environment was enough. A lot of conversations started happening naturally. In fact, some of my best clients came from these experiments, probably in large part due to taking the pressure off of myself to just "power through." Occasionally I did end up standing in a corner alone out of exhaustion, but those were few and far between. And hey, at least I was out of the house and making an attempt.

Many skills also get easier by increasing frequency, whether you fail or succeed. A few years ago in Portland I started going to these small group classes at a gym. They were really tough, like I-can-barely-move-by-the-end tough. My goal was to go 3 days a week and it was really difficult to stick to it. Every time I was supposed to go, I had to re-motivate myself. If I ever missed a Friday or a Monday due to a long weekend or a work trip, that meant I was going 5-7 days between workouts. It was even harder to motivate myself.

I did an experiment: I started going 5 days a week, Monday through Friday. Did it suck at first? Definitely. Somehow, though, it got easier much faster. Teaching my mind and my body that this level of activity was normal got me over the hump much quicker than having 48 hours or multiple days between attempts. It also meant that if I missed a Friday or a Monday, I still got 3-4 workouts in during a week instead of 1 or 2. Sometimes the answer is to increase your frequency of practicing a new skill, knowing that even if you miss sometimes, you'll still be better off than if you weren't trying at all.

The more often you face Resistance head on, even for just a few minutes, the stronger you will get. Your stamina will increase. You'll build systems and processes. Your brain will get used to the idea of doing the thing and it will start noticing patterns for you to optimize.

I mentioned earlier that, at the start of building a new skill, we overestimate the role willpower will play. We think we're going to need sheer willpower to get us all the way from total beginner to our dream of what being good at the skill looks like. In my experience, you only need willpower in small doses and temporary periods of time to get through the obstacle of building a habit.

Something that really helps me overcome this mental block is giving myself a time limit for the first round of building a new skill. Through trial and error I've found that 90 days is a pretty reliable timeframe. The first month almost always consists of a lot of failure; either doing the thing incorrectly or not doing it at all because it's not in my routine or I'm getting frustrated and discouraged. The second month I'm starting to get momentum but not seeing results, but by the end of the second month I'm starting to get results and it's starting to get fun. That gives me one more month to really solidify the new habit.

If I make a promise to myself to try a new skill for 90 days, there's a good chance I will get through that initial willpower hurdle and make it to the fun part. If I don't get there by the end of the 90 days, I re-up for another 90 and try to look at what went wrong. Another tip that I've mentioned elsewhere: it really helps to count down instead of up in these experiments. It sounds silly, but for some reason writing down "Day -90," "Day -89," and so forth taps into that neurotic part of my brain that wants to finish things.

This pattern of average time periods for change comes up in all kinds of areas, even beyond just building new skills. Here are a few time patterns in my life where I've observed a monumental shift after continuous effort:

These aren't meant to be exact and apply to you in the same exact way; think of them like "orders of magnitude" to help you realize that even major efforts usually have finite periods of intense difficulty (I have purposefully left out huge things like death of a loved one, as those struggles are sometimes life-long and complex).

To help you visualize this concept, check out this amazing sketch note created by Richard Steinmetz: 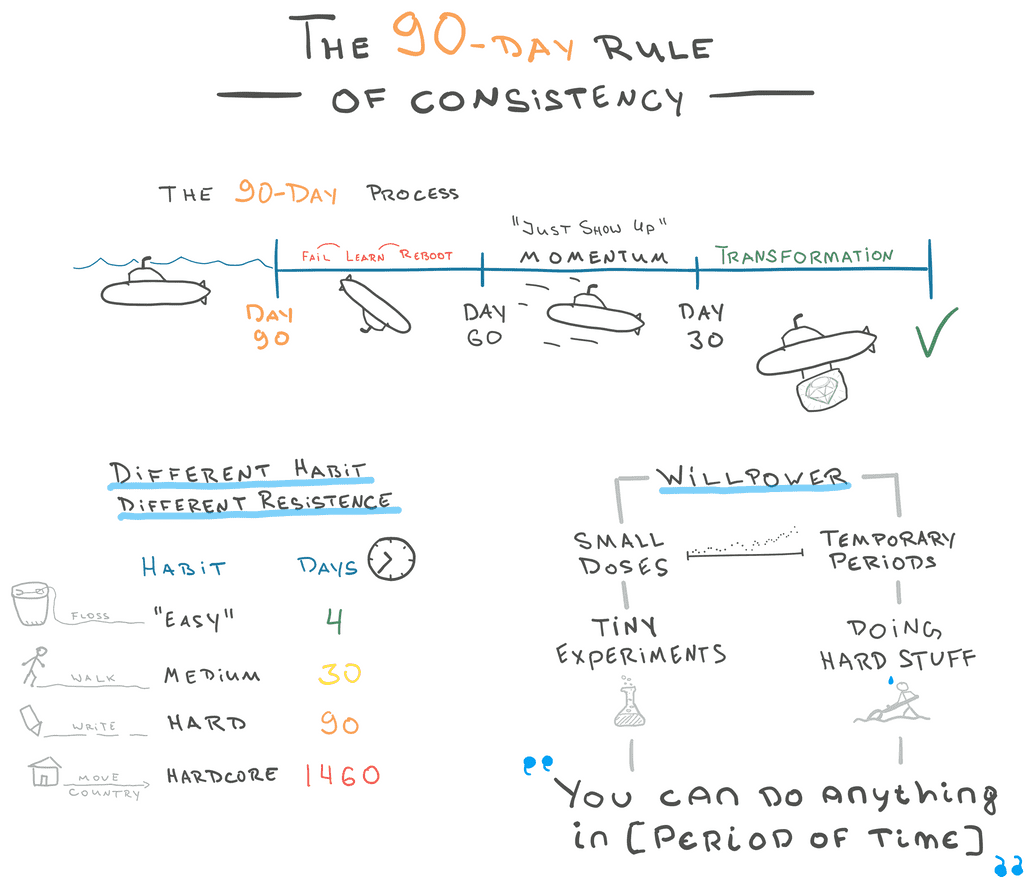 At the end of the day, growth comes from doing hard stuff repeatedly. Pretty much everything else comes down to finding ways to get yourself to do the hard stuff and keeping yourself from quitting doing the hard stuff. I talked in a previous issue of Developer Microskills about the importance of reducing your project scope (which has been expanded into a chapter of Guide to Tiny Experiments) and this is the big Why there. You're trying to whittle the project down to the core work of building the skill so that you can get in effective practice.

As always, thank you so much for reading. I hope this has been helpful for you -- let me know if you see results from implementing this stuff!

This article began its life as the 25th issue of the Developer Microskills Newsletter. Thank you Shruti Kapoor for the topic suggestion! Each week, I send out a practical, actionable way to improve as a developer and developer advocate. Sign up below!