13 Lessons I've Learned about Starting a Business from Ramit Sethi

My friend Justin recently asked me about my experiences with Ramit Sethi and his courses. I was already planning on writing up an article about this stuff, but now I owe it to him to follow through on it.

I've been following Ramit Sethi for six years, beginning with reading his book I Will Teach You to Be Rich in 2011. It was targeted at young, single people, but since I was working in insurance and investments with mostly young families, I argued with a lot of it. I didn't really get what he was about with regard to systems and targeting one demographic back then, and frankly I thought he was a little scammy. Despite that, I signed up for his email list and got what felt like a hundred emails in a week. I actually responded to one and said, "All due respect, I feel like you email me more than my own mother." I didn't expect a response, but I got one. I don't remember what he said, but it was polite, something like, "No problem. I'll take you off the list." That's it. I was pretty surprised. I later found out in Zero to Launch this is a very purposeful tactic. Nearly all snarky haters are just acting in the heat of the moment, and simply responding politely will often catch them off guard and diffuse the situation. It sure worked on me. Had he responded in kind, I may never have given him a second look - to my own detriment.

I also later learned that his first impression as a bro is a prospecting technique. I know, hear me out here. It turns out Ramit isn't a bro. I mean, yeah, he went to Stanford and his brother is a Silicon Valley dude. That's all true. But the more you dig into his content, the more you can see that he really cares about producing quality content that reaches two, and only two, types of people: top performers and people who aspire to be top performers. Then, once you actually pony up and pay for his material, you see a very different side of him. Ramit uses this marketing tactic to weed out people who don't want to be his customers. The bro facade is only the first step of that technique; it also includes being brash and unapologetic in his articles and turning down people with credit card debt. Within all of that, though, is material that actually produces results, and those of us who are obsessed with finding what works continue to push through and dig deeper. Ramit, like many others, believes it's way more important to have 1000 true fans who will love everything you do than to have 10,000 followers who don't really care either way.

It took nearly a decade, but this prospecting technique eventually worked on me. Over the last couple of years, as I was closing in on paying off my debt, I would pick back up IWT occasionally to review what he says about building systems for money. I've honestly never been good at automating my finances - I am a little too much of a control freak about my money (cough hyper nerd cough). I'm that guy who will build a spreadsheet for literally anything and enjoy every minute of it. If you want to learn more about his automation techniques, though, you can check out his Ultimate Guide to Personal Finance.

Somewhere in the last year I fell into his sales funnel. In looking for freelance developer resources, I ended up reading articles of his about side work, which piped me into his sales funnel for "Earn 1K on the Side," one of his earliest courses. His prospecting is expert level, and I was squarely in his target market. His products really are a marvel of prospecting perfection. He and his team write every single line of every email and every sales page to be extremely clear about who the course is and is not for. His courses are admittedly more expensive than those of his competitors, but if you are in his target market, they are absolutely perfectly made for you. I really admire the craftsmanship.

I signed up for Earn1K to learn more about freelancing, both in tech and outside of it, like copy-writing. Then, once I decided to make my first tech video course, I also signed up for Zero to Launch, which is an exceptionally well done course on "productizing" a service as a video course. Both Earn1K and ZTL are 8 week courses, and the sites are configured to only unlock certain parts at a time. This is brilliant, as you can't then skip ahead and just consume a ton of content without acting on it. Ramit is all about using psychology to get people to act. It's the same principle of success that everyone from my housemate to James Altucher to Tony Robbins uses. The idea is that the tiniest amount of action is worth much more than a flood of thinking. Actions not only produce results, but produce data that can then be piped back into the process for refinement.

Ramit takes this approach to every subject, from social skills to money to sales. First, focus on the minimal amount of effort required to get the desired result. In the case of freelancing, it's "first get a customer" (that's also rule C in James Altucher's business rules, by the way). This is similar to Tim Ferriss' Minimum Effective Dose in 4 Hour Body. In fact, a lot of Ramit's systems he describes in Earn1K and Zero to Launch are sort of the freelancing and electronic video course adaptation of the 4HWW business model. I see a crucial distinction between Tim and Ramit, though. Ramit is all about value, about helping others, and about crafting superior content. He says repeatedly in Zero to Launch that the goal is to use your online education business to truly serve others by producing remarkable content that pushes people to action in order to change their lives. I don't see this mindset at all in Tim Ferriss' work. I've never met Tim Ferriss. He's probably not a bad guy. But the tone of 4HWW and much of his other work is hyper-focused on me, on how I can maximize my income and minimize my work. While it is crucial to focus on yourself and on what you can control, there is a shift in Tim's tone that comes off as exploitative and selfish. Ramit's tone, on the other hand, suggests that self-satisfaction and benefiting others are bound together, not mutually exclusive.

So now, having gone through both of these courses, as well as what feels like a million other articles and videos from Ramit over the years, here are some of my biggest takeaways.

Lessons on Starting a Side Business (Earn1K)

Earn1K (E1K) is all about starting your first freelance business. It can be anything from designing PowerPoint presentations to dog-walking to assembling furniture. This course lays the groundwork for many of Ramit's other courses, both from a philosophical standpoint, and because it was one of his earliest successful courses where he started find a framework that worked for him. The look and feel is a little dated at this point, but the content is still excellent.

Lessons on Building a Video Course (Zero to Launch)

Much of Zero to Launch (ZTL) builds on Ramit's philosophy laid out in E1K, but with a shift from the real world to the online world. In fact, the recommended path is to build a freelance business for a while, and then use that experience to build an online education product once you have noticed recurring patterns. Here are some of the biggest lessons I learned from the course.

So there you have it. Justin, I hope you find this helpful. For the rest of you, let me know who else you want me to talk about or any other topics about tech or business you're interested in. At the moment I've just finished James Altucher's books Choose Yourself and the Choose Yourself Guide to Wealth, in addition to his fantastic podcast. I'm working on an article similar to this one about Altucher's big ideas. I've also just started to get into Chris Guillebeau's Side Hustle School thanks to Justin. It's great stuff.

Also, I never post pictures of myself, but I took a picture with a llama who was wearing a unicorn costume last month and feel the need to share it. It has nothing to do with anything you just read. 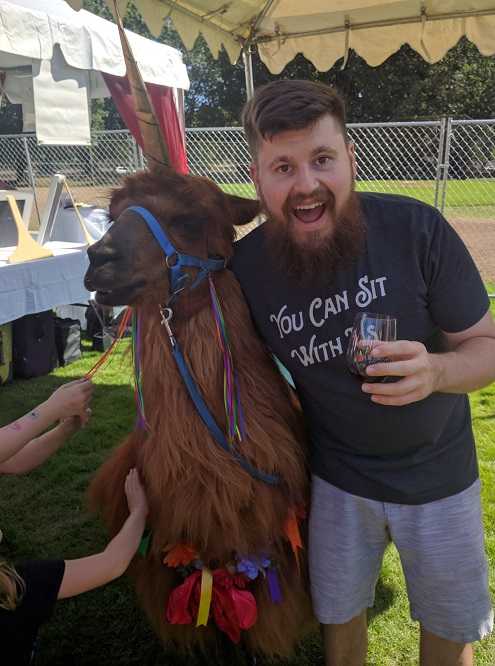 P.S. Here's one last lesson from Ramit, but it doesn't really fit into any of the above: vulnerability only makes sense after success. He wrote a great blog post a couple of months ago called, "Please...stop writing about how vulnerable you are." Give it a read and let me know what you think.

← Previous Article8 Lessons About Change I Learned from PTNext Article →The Feedback Loop: My #1 Lesson from 2017